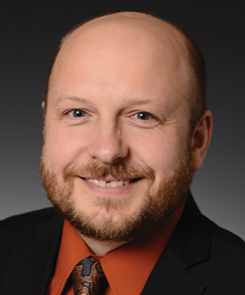 Joel Mazur started as the City Manager of Napoleon in January of 2017. During his time in Napoleon, he is responsible for spearheading a transformational downtown revitalization project, establishing an Outdoor Refreshment Area, seeing through the reconstruction of the Water Treatment Plant, and overall has established a vision to help the community grow and prosper. He also had an integral role in the construction and leasing of a spec building, which is now the home of the world headquarters of JAC Products, a tier 1 auto supply company that employs over 350 people in Napoleon.

Mr. Mazur was the City of Toledo’s Commissioner of Field Operations in the Department of Public Utilities before coming to Napoleon. In this capacity, Mr. Mazur was responsible for overseeing the operations of the Divisions of Environmental Services, Sewers and Drainage Services and Water Distribution, which overall accounted for approximately 300 employees and a $35 million annual budget. He was also responsible for implementing the Departmental Safety Program and was Toledo’s representative for Toledo Public Power.

Mr. Mazur was formerly the Assistant Chief of Staff in the City of Toledo Mayor’s office. In this capacity, he was responsible for overseeing several departmental operations, which included Streets, Bridges and Harbor, Fleet and Facility Operations, Parks and Recreation, Transportation, the Hoffman Road Landfill, Department of Neighborhoods, the Plan Commission, the IT Department and the Arts Commission. He also led the implementation of several special projects, including the acquisition and financing of One Government Center and the restructuring of the Building Inspection and Code Enforcement Divisions.

Mr. Mazur was previously employed with the City of Toledo in the Division of Environmental Services as the Brownfield Redevelopment Officer. In his time with Environmental Services, Mr. Mazur oversaw environmental remediation and development at the Marina District, the Tower on the Maumee, several properties along Swan Creek, the cleanup and demolition of the Southwyck and Northtowne Malls, construction of UpTown Green, and many more. Overall, he managed approximately $45 million in funds used for project redevelopment from a wide variety of sources.

Mr. Mazur is a graduate of Adrian College with a Bachelor’s degree in Environmental Science and Wildlife Biology. He has graduate school experience in the field of Public Administration. He and his wife Amanda live in Napoleon with their sons Ace and Ziggy. He believes that Napoleon is a great place to work, live and raise a family.